The testing results of environment criteria in Phú Yên farms showed some organic substances and few species of algae which are harmful to the farmed shrimp and fish.

The Center for Monitoring aquaculture environment and disease in the Center, under the Research Institute for Aquaculture no.3, said they conducted an environmental surveying and warning test in the farms of freshwater shrimp, lobster and marine fish of Xuân Hải, Xuân Hòa communes and Sông Cầu town (Phú Yên province) during 21-22 September 2019 and found out that most of the criteria are within the limit for aquaculture.

However, they discovered a few species of algae in Cù Mông pond such as Peridinium sp., Pseudo-nitszchia sp. and Gymnodinium sp. living at the density of 550-1,250 cellular per litter. Besides this, there were some environmental criteria staying beyond the limit. The content of DO (4.70 mg/l) in village 1 of Xuân Hải commune (the end of Cù Mông pond) fails to meet the requirement of QCVN 10-MT: 2010/BTNMT.

“The testing results showed the organic substances and harmful algae in the water, which could cause some damages to the farmed shrimp and fish. The density of bacteria Vibrio stayed beyond the limit. The bacteria Vibrio parahaemolyticus  causing AHPND disease was detected. According to the National Center for Hydro – Meteorological Forecasting, the rain and storm in the next few days may change the temperature, pH, salinity of water, DO, and nutrition salts. This will create favorable conditions for disease pathogens to grow in shrimp farms”, reported the Center for Monitoring aquaculture environment and disease in the Center.

The Center warns local farmers to adopt necessary measures to prevent their farmed shrimp and fish from possible diseases. They are advised not to fill water in the freshwater shrimp ponds at this time, especially in Cù Mông ponds. 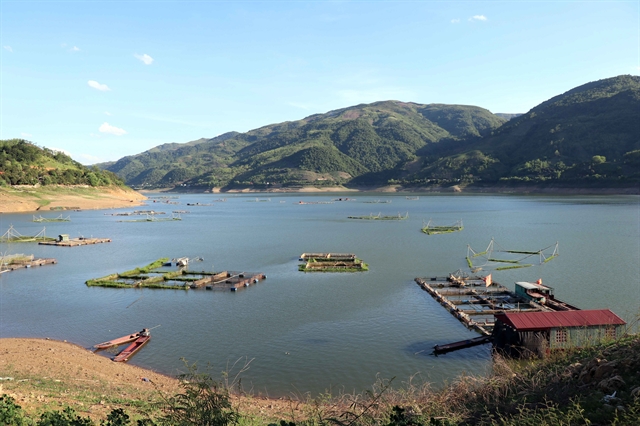