Prices of white leg shrimp and black tiger prawn in western provinces remained high in the run up to the end of the 2021 shrimp crop. Shrimp size 20 pcs/kg increased by 10,000 dong.

Farmers in western provinces are rushing to harvest the last shrimp crop of the year to prepare for the 2022 shrimp crop. The fewer shrimps are on the farm, the higher prices will be.

The Sóc Trăng provincial Sub-department of Fisheries said that the local aquaculture and seafood exploitation has been basically stabilized and the disease outbreak has been well controlled, leaving less damages than the same period last year. However, the fisheries sector has to face challenges due to the decreasing prices of commercial shrimp, especially the slump of prices of shrimps purchased at the farmgate after the Instruction no.16. Meanwhile, prices of shrimp feed, gas, and other production costs increased.

In Bạc Liêu, prices of whiteleg shrimp increased but not much higher than that of giant tiger prawn. Trader Lê Văn Dũng in Phước Long (Bạc Liêu) said that he spent VND 250,000 on buying giant tiger prawn size 20 pcs/kg, and VND 190,000 on shrimps size 30 pcs/kg.

Đỗ Ngọc Tài, Director of Ngọc Thái Ltd,. Co in Giá Rai town of Bạc Liêu province said that his company was coping with difficulties of insufficient material and labor due to the impact of the Covid-19 pandemic.

Ngọc Thái and enterprises managed by Tài in Sóc Trăng and Bạc Liêu have suffered from the same situation amidst the increasing demand of shrimps for export at the end of the year.

“We lack materials because farmers were not allowed to stock shrimp following the Instruction no.16 a few months back. In October and November, even though the province relaxed the social distancing scheme, local farmers face difficulties in rearing shrimps due to bad weather”, said Tài.

“The number of workers decreased by 20-25% and around 40-45% of them are allowed to go to work now. The lack of workers was driven by the Covid-19 infection, prohibition from their families, and the isolation regulation of F1 cases”, explained Tài.

The company’s owner, who has been working in the fisheries sector for 40 years, said that was the first time the production cost had increased like that. Besides expenses on nCoV tests for workers, shrimp enterprises had to suffer from the increase in the costs of packages, raw materials, chemicals, and transportation.

“The production costs rise further 20%, however, we can not increase the export price of shrimp as the contract was already signed a few months ago. Shrimp enterprises have suffered from losses for three months”, the owner of an enterprise in Cà Mau shared. 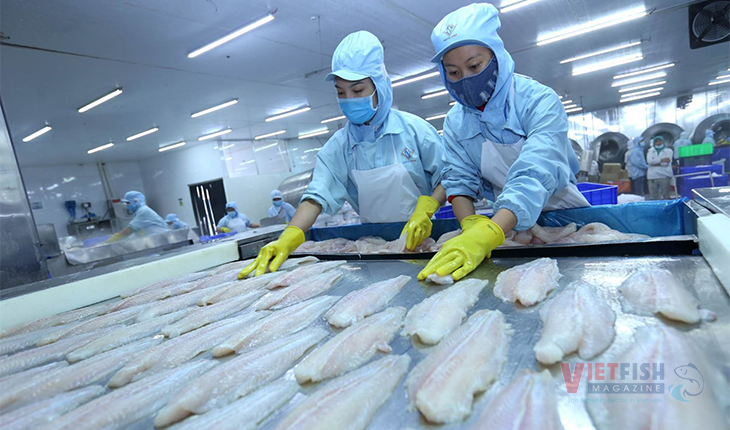 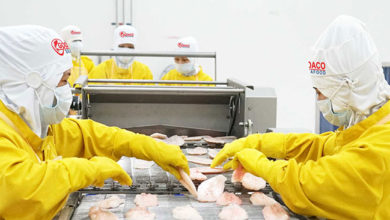 Tuna exports to the Middle East increased by 15%