Currently, many shipbuilding and repairing shipyards in central coastal localities face many difficulties due to a lack of jobs. In addition to the objective reason that the situation of the Covid-19 epidemic makes the input material stage limited, there are also very prominent subjective reasons.

Afraid of losing the traditional job

In Hà Tĩnh, the shipyard by the La River was once famous and bustling, now it is quiet. Sharing with the press, Mr. Nguyen Pham Tam, former Chairman of the Ly Chinh Thang shipbuilding co–operative (1973-1992) in Ben Den, told to VFM: At the most prosperous time, the co–operative had up to 350 members. The boat was sold throughout the provinces and cities such as Quảng Ninh, Thanh Hóa, Hải Phòng,… In which,  offshore fishing boats are the main products. But now, there are only 2 shipyards operating in moderation which belong to Mr. Duong Quoc Huan and Mr. Nguyen Cong Hoanh. Each shipyard only has about 3 – 4 workers, mainly builds small boats to rescue people in floods.

According to Mr. Duong Quoc Huan (the owner of a shipyard in Ben Den village), many years ago, his shipyard built about 50 – 70 large boats/year (offshore fishing boats with 20 m long and 6 m wide). But in the past few years, only around 20 boats were built per year.

In Nghệ An, Trung Kiên village (in Nghi Thiết commune, Nghi Lộc district) is one of the shipbuilding villages with a history of hundreds of years. However, in the past few years, the craft village has been empty due to lacking of customers. Mr. Vo The Xam (64 years old), one of the largest shipyard owners in the village, said that just 5 years ago, the village had 42  shipyards, the sound of saws was bustling all day, but currently is  lacking of customer  and operating in moderation.

In response to the question of why the shipbuilding village is dwindling, some artisans shared that, in recent years, the State has the policy to promote offshore fishing fishermen  with many incentives for ships with a large capacity and modern steel hull. Therefore, many fishermen changed direction and took advantage of the support to pursue their dream to reach far away for fisheries. Moreover, the plastic composite, aluminum iron ships quickly won the hearts of fishermen because of their high safety, product preservation ability and outstanding carrying capacity.

According to the skilled workers in the village, the current boat-building profession has a rather precarious income. Factory owners do not dare to produce ready-made products but wait for orders to start construction. Therefore, workers are  forced to find other livelihoods. The inherited workers are almost nonexistent.

In addition to these reasons, one of the reasons why the shipbuilding industry  lacking of customers is that the fishing industry is no longer as prosperous as before. According to many fishermen, currently, the number of fishing boats is not as many as before, the output per trip has decreased significantly, leading to low income, making laborers lose their interest. Mr. Pham Gia Son, the TH 91199 TS owner, shared that if before, the ship went out to sea 3 – 4 times/month, maintained from 12 – 14 employees, but in the past two years, sailing has faced many difficulties, especially labor shortage.

Quỳnh Long Commune, Quỳnh Lưu District, Nghệ An used to be very famous for seafaring, more than 90% of the people in the commune lived by offshore fishing. By 2018, the whole commune had more than 90 offshore fishing boats, but by April 2021, there were only more than 55 boats left. Because the situation of fishing could not meet the income, many people sold their  boats and changed jobs.

Along with the increasingly rare fishery labor, the catch per trip is also low, many shipowners have to face many difficulties. Ms. Pham Thi Hoang Tam, Head of Quảng Nam Fisheries Sub-Department, said that over the years, aquaculture has decreased in both quantity and quality. The seafood mainly works on the water surface such as anchovies, Selaroides leptolepis,… have low output and low economic value.

The low income from the fisheries industry has caused laborers to leave the sea  and join industrial zones or labor export, making it difficult for many localities to exploit seafood. The indirect consequence is that many shipyards are forced to “retire”. 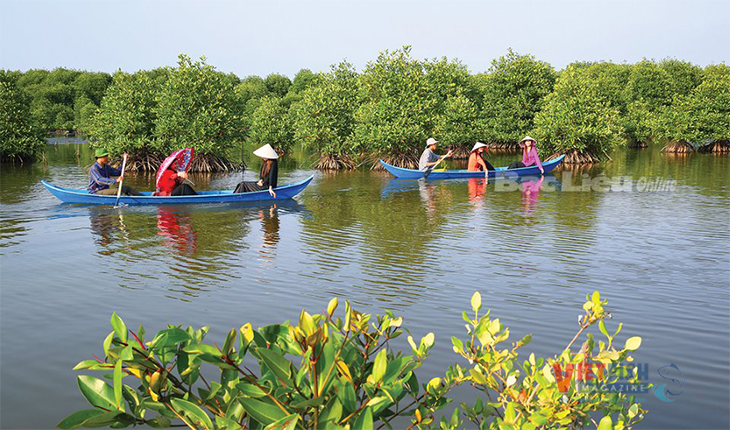 Poor farmers to get financial support when joining agricultural insurance