The Tuyên Quang provincial Center of Fisheries has been the main provider of seafood broodstocks all over the province. The Center supplies about 80 million fingerlings and 32 million juveniles of all types, and 60,000 special fish to the market every year.

Director of the Tuyên Quang provincial Center of Fisheries Phạm Mạnh Thông said that the Center had mastered the artificial spawning of the fish. Special fishes such as spotted catfish, goonch catfish, river chup, and Anh vu carp have been successfully nursed and produced.

So as to produce qualified juveniles, in every September the Center selects broodstocks which are reared, provided with nutrition, and put into spawning under favorable weather conditions. What differs is that those broodstocks are not allowed to spawn naturally, instead they are injected with stimulants to spawn at a specific time.

On July 16, 2021, Tuyên Quang Provincial People’s Committee issued Decision no.399 approving the Program of applying science and updating the technology of raising productivity, developing trademarks of key species and delicacies of Tuyên Quang, period 2021-2025. The Program also involved the research to enhance the effectiveness of artificial spawning and commercial farming of some special fish such as spotted catfish, goonch catfish, river chup, and Anh vu carp.

According to the Decision, localities will be financially supported to implement the production of denti carp (Spinibarbus denticulatus Oshima, 1926) upon a supply chain in Na Hang, Yên Sơn, Lâm Bình districts and Tuyên Quang city. Two nursery models of 10,000 goonch catfish juveniles at the density of 100 pcs/m3 and 150 pcs/m2 in Yên Sơn and Chiêm Hóa districts. Two models of nursery and commercial farming of Anguilla marmorata have shown high output and productivity in the hydropower reservoir in Na Hang district.

The model, which is applied with updated science and technologies to build a Anguilla marmorata nursery and commercially farming method with high output and productivity in the Tuyên Quang hydropower reservoir, has been implemented by Nhat Nam Seafood Company since mid 2021. The model transferred and received two technology processes, including the nursery of Anguilla marmorata from phase I to phase II in tanks and the commercial farming of Anguilla marmorata in cages.

The nursery model of Anguilla marmorata from phase I to phase II with 50,000 juveniles size 5g/pc has completed with as many as 39,000 pcs size 50g/pc being survived and survival rate of 78%. The surviving juveniles continue to be reared in cages under the commercial farming model, scale up to 1,620m3. Those fish are weighing up well to 600g/pc on average. 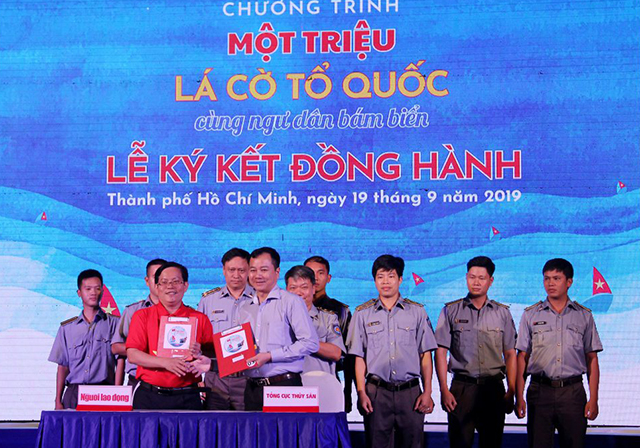 Directorate of Fisheries supports fishermen on their offshore fishing trips