An Minh District in Kiên Giang Province is expanding a two-stage industrial farming model to breed white-legged shrimp which offers high incomes to farmers and protects the environment.

It involves breeding the shrimp are in round-shaped ponds covered with anti-sunshine nets and plastic sheets on their beds in a two – stage model.

In the first, shrimp fry are bred in a nursery for a period of 25 – 30 days, and in the second, they are transferred to the main pond at a density of up to 450 creatures per square metre. They are raised based on VietGAP standards.

Lê Văn Khanh, head of the An Minh District Agriculture and Rural Development Bureau, said the model has been developed in the district for two years, and it offers a new advanced farming model to adapt to climate change.” It is safer and more effective and sustainable compared to industrial farming in earthen ponds.”

There are 15 households in the district farming white-legged shrimp using the model, according to the authority. They are instructed by agricultural officials to regularly replace the water in the ponds and check water quality and colour to ensure the sustainable growth of the animals and protect the environment.

The households are also taught how to equip their ponds, treat water and waste and select shrimp post and feed. The shrimp post bred under the model have a survival rate of 90 per cent and a yield of 50 tonnes per hectare per year.

Farmers can breed three to four crops a year using the model. Each crop lasts 60 – 70 days. Nguyễn Văn Suồi, a farmer in the district’s Vân Khánh Đông Commune, said he breeds shrimp in five 500sq.m ponds and earns VNĐ70 million (US$3,000) from each per crop.

The model offers higher incomes than extensive farming or rotating between shrimp and rice in the same field, he said. With its advantages like being on the coast, An Minh has excellent conditions for aquaculture, including shrimp farming.But most shrimp farming here is done using the shrimp–rice model, and yields are not high.

Khanh said the district plans to expand the industrial and semi-industrial shrimp farming models to more than 100ha by next year, focusing on the two-stage industrial farming model. But it requires large sums of investment while farmers lack the experience to implement the model, he said.

To develop the model, the bureau would offer training to more famers and help them get loans by petitioning the province and district, Khanh added. 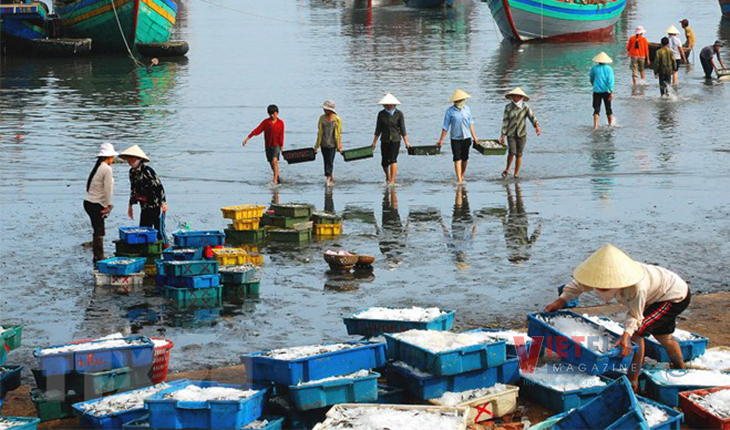