Instead of rearing commercial fish like other farmers do on floating cages in Đồng Nai river, Tống Trọng Nguyên (living in Tân Mai ward, Biên Hòa city) makes his own way by farming ornamental fish. His choice has made the 25-year-old man earn billions dong from the empty floating houses.

To be born in a family with tradition of rearing fish on floating houses, Tống Trọng Nguyên got used to his life on rivers. He has learnt fish farming in floating houses on Đồng Nai river since childhood.

However, while his parents and neighbors focus on commercial fish, Nguyên is interested in koi fish, a ornamental fish from Japan.

Fish farming in floating houses has gone up and down because of market price. He once witnessed his parents’ desperation when fish price slumped; his desire of finding a new way grew more and more. At the age of 16, Nguyên told his family about his plan of rearing koi fish, which was objected. He recalled what his family said: “Koi fish is a kind of noble ornamental fish that live in luxury tanks. How can they survive in such floating houses on rivers?”

Not giving up, Nguyên persuaded his family to give him a chance to rear koi fish and he tried his first koi in anunused cages. Being approved by his family in doubt, Nguyên timidly bought young koi fish for farming but thinking about breeding. In spite of being certain, he faced the first challenge when the koi fish got anorexia, did not weigh up and something happened with their health.

After studying himself, Nguyên figured out that koi from Nhật Bản get used to living in cold water. Higher temperature of water in Đồng Nai river has made them shock. Thus Nguyên decided to take them to a tank, adjust water temperature increasingly, and take them back to a floating house on river once they adapt to the environment.

Nguyên continued to study the breeding of koi fish and it took him two years to achieve initial success.

After succeeding in breeding koi fish, Nguyên offers the fish to pleasure fish shops. The beautiful fish immediately are attracted to many shops in the whole country. Making his own brand with koi fish, Nguyên expands his farming scale from an empty raft to an area of thousands square meters after eight years. “I own ten cages, 54m2 wide each”, says Nguyên.

He can make five tons of young koi fish from these cages. Koi fish can be sold after seven months of stocking. If selling koi fish is difficult at some time, he waits till they grow up and are sold at higher price. The more koi fish is, the higher its value gets.

Although his start-up made his family worry, it now brings him billions dong. “I supply 18 tons of koi fish to the market and get two billion dong each year”, says Nguyên.

Not only does Nguyên continue with koi fish farming, but also he is developing an ecotourism by visiting koi fish in floating houses. “I am making a landscape with ornamental plants and vegetables to attract visitors and have more income besidessellingyoung koi fish” says Nguyên. 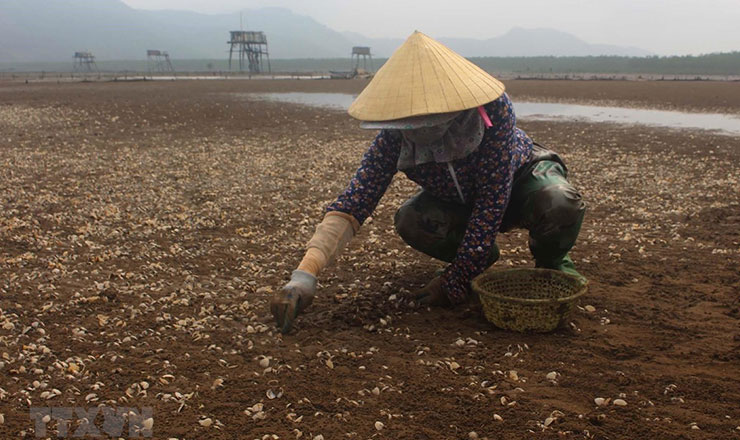